Amelia and Molly did a terrific job in their first International Taekwon-Do Federation South East Queensland (ITF SEQ) demonstration when they performed their self defence routines.

The free sparring is always a crowd favourite. Suzie, Serena, Brent and Sabum Michael took to the stage showing the free flowing and continuous style of free sparring taught at ITF SEQ.

Chloe, at her second ITF SEQ demonstration, took part in the self defence display as well as in three step sparring and showed the concentration levels a student can develop through Taekwon-Do training.

Gabriella was focussed and on target during her self defence routine and her three step sparring. She is well on her way to her next belt promotion and taking part in the ITF SEQ demonstration team continues to help build her technical abilities.

Jason and Paul showed confidence and good technique in their board breaking kicks with Jason smashing the side piercing kick and Paul smashing the front snap kick. Both gentleman performed these breaks with only a single person holding the board, which adds to the difficulty of the break.

Sabum Michael demonstrated true indomitable spirit in his jumping front snap kick board break. After two attempts, he refocussed immediately and was successful on the third attempt.

The rest of the photos from the demonstration can be found here.

Many Benefits of Exercise for Children through Kiddy Kwon Classes

How Experienced is the Instructor?

Balance is Important and Taekwon-Do Training Can Help

So you have your black belt – what’s next? 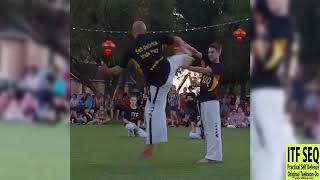 Taekwon-Do and Stretching - 7 Benefits You Need and Want!

Have You Ever Wondered What it Means to be an International Instructor?

The Right Food for the Right Result